Home
About
Get There
Tickets

By Common Ground on the Hill (other events)

Ramzi Aburedwan grew up in a refugee camp in Ramallah, his childhood and adolescence shaped by the violence of the Palestinian intifada. Joining the legions of stone-throwing youth around him, Ramzi seemed destined for a life of violence and despair until he participated in a musical workshop at the age of 16, an experience which transformed his life and gave him a new mission for peace. Now a widely respected classical and Arabic musician, Ramzi not only founded and leads the Dal'Ouna Ensemble, is music director for the Palestine National Arabic Music Ensemble, and performs Western classical music throughout the Middle East and Europe, but he also founded the Al Kamandjati Association, whose mission is to bring music to the children of the refugee camps.

Join Ramzi Aburedwan and his Arabic-French Dal'Ouna Ensemble on their U.S. premiere tour! Named after a festive Palestinian musical genre, the ensemble's repertoire extends from Egypt to Andalusia, passing through various regions and traditions of the Middle East, and adding medieval and jazz accents to a musical confluence of East and West. Combining traditional Arab instruments with viola and accordion, music ranges from istrumental to traditional poetic genres focusing on love, freedom and nature. Experience Ramzi Aburedwan and the Dal'Ounda Ensemble: a story of encounters, shared experiences, a refuge where borders don't apply, and a message of hope. 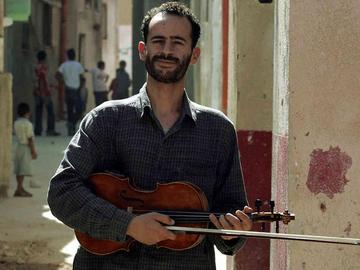 Common Ground on the Hill

other events by this organization